This is the latest virtual world, aimed at kids where they have their own monster and can interact with the other monsters. 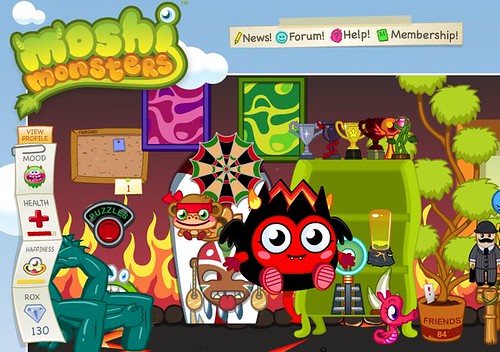 The usual routine applies. Money or “Rox” are earned by playing games and the Rox can then be spent in buying accessories for the monster’s room etc. You look after your monster, naming it, feeding it, interacting in a fairly similar way to Webkinz.

Friends can be made and messages can be sent on each monster’s noticeboard.  The monsters are cute. They can be made different colours, you can buy them clothes and accessories once you’re a paid up member. There’s a Moshi Monster world to explore, alot of which is restricted until you pay your membership fee which isn’t cheap at £4.95 per month. You can buy seeds and grow your own Moshlings.

There are discussion boards and news in the form of a blog.

The main observations my children had with Moshi Monsters when compared to the similar Club Penguin or Webkinz was that Moshi Monsters seemed to require a higher level in reading. Whilst this was fine for the older children, it proved problematic for the 5 and 4 year olds.  They had to guess  a lot of the time when trying to complete games.

In saying that, if your child can read, the games to date have looked fairly educational. General knowledge, maths, reasoning and spelling all tested which is good.

The children also gave out about the short interval of time to harvest their moshlings and that most of theirs escaped. But they did agree they preferred the uncrowded feel of Moshi Monsters when compared to the initial mayhem of Club Penguin.

Alas they still missed the fun of the secret missions of Club Penguin so are returning to play it more in preference to staying with Moshi Monsters.

Would recommend Moshi Monsters only if your child can read. I have bought 4 of my kids a month’s membership to see how they get on with it before signing up for any further length of time.