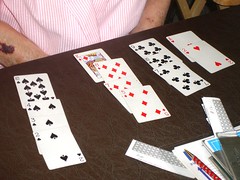 I’m off to bridge tonight for the first time in ages and am looking forward to it.

My mother taught me years ago when she played in Wicklow and I was in my early teens. I guess she wanted someone to practise with at home. Just the basics: how to count your points, knowing just to bid when you’d 12 or more points and how to play the cards. Alas we never got as far as the bidding conventions: of how to let your partner know exactly how many points you have and what sort of a hand. But even at that stage I must say I enjoyed the game.

A few years later in UCD the civil engineers started playing bridge amongst themselves one term mostly in the Kevin Barry room in Earlsfort Terrace. I was handy to rope in if they needed a fourth to make up numbers as knew the very basics. That phase didn’t last long though and within a couple of weeks things had moved on to poker which was more accessible and lasted alot longer.

When we moved to Bandon I decided to take Bridge up again and learn from the beginning. Luckily one of the clubs was starting lessons and so began my bridge playing here. Finally I have learnt the bidding conventions and my playing has improved. Its an ongoing project though and every week you learn something new.

Its not the wildest of nights out as the age profile of those playing tends to be older rather than younger. But its good fun. There are some characters there. Many of the ladies and gents play 5 or 6 nights a week as there are numerous bridge clubs in Bandon and nearby. It would be great if more younger people joined, it is a very sociable card game and the more playing the better as you get to move around the room and chat/play against many different players on a night.

To practice and for play I had purchased a PC Bridge playing game which I find great. This got me thinking yesterday that a more portable version would be excellent. I believe Nintendo have Bridge as part of their 42 All Time Classics but to be honest it doesn’t look great.

Hopefully the play is more attractive than it looks. I shall give it a go at the weekend when I can borrow the kids’ DS. Also there seems to be Ultimate Cards Game for Nintendo DS but only currently available in the US?

This appears also to contain a Bridge card game but I have not been able to discern whether it is better or worse than the 42 Classic Games version.

Surely there is definitely a market for a decent Bridge card game for Nintendo DS given the success of Brain Training, Brain age etc? If there was one, I know what I’d be getting my mother for Christmas!

Purchased 42 All-Time Classics for the DS yesterday and most disappointingly the Bridge on it is rubbish. Beyond simplified, bidding rushed through and not shown properly, play just doesnt make sense most of the time and there appears to be no way to select different conventions or modify play/bidding in any way.

Its just driving me nuts playing it so gonna abandon it before it drives me to distraction.  So I’m still on the lookout for a decent Bridge for Nintendo DS game.

The Bridge for Nintendo DS by ManicMammy's Blog, unless otherwise expressly stated, is licensed under a Creative Commons Attribution-Noncommercial-No Derivative Works 3.0 Unported License.

47 Responses to “Bridge for Nintendo DS”